This review is long, long overdue – and lengthier than typical for my blog.  My love for PARK started a mere two weeks after its high-profile launch six years ago.  As a resident of Westmount and a longtime fan of Kaizen, I was quite saddened by the sushi giant's degradation which led to its eventual demise.

When news came out in 2012 that a part of the talent working the kitchen there – a budding chef by the name of Antonio Park – was opening his own eponymous restaurant in a different part of my neighborhood, I naturally had to check it out.

The restaurant was booked solid for weeks; leading me to use my "clout" as an influencer to nab a table by tweeting directly to chef Park – that would be the first and only time I resort to this tactic.  A keen and enthusiastic user of social media, Antonio obliged and an informal relationship based on mutual respect was born.

The dinner that ensued – a five-course feast – would go in my top five of all time.  I was blown away by the first-rate skills, artistic plating and gorgeous flavours on display.  Since then, over the years, PARK became my go-to spot as I dropped in regularly for family brunches, power lunches and dinners with out-of-towners.

Yet, somehow, in over a dozen visits, I never got around to reviewing it.  The reasons abound; from camera-hostile lighting, to being with the wrong company to not wanting to pause and take mental notes in the face of food this good…

This would all change tonight, as I intended to finally review the Victoria Avenue tenant during my family's annual holiday outing.  We wanted something nearby to avoid the Boxing Day crowds; and since my kids have recently become sushi fans, a stroll towards my Japanese neighbor seemed like a great idea. 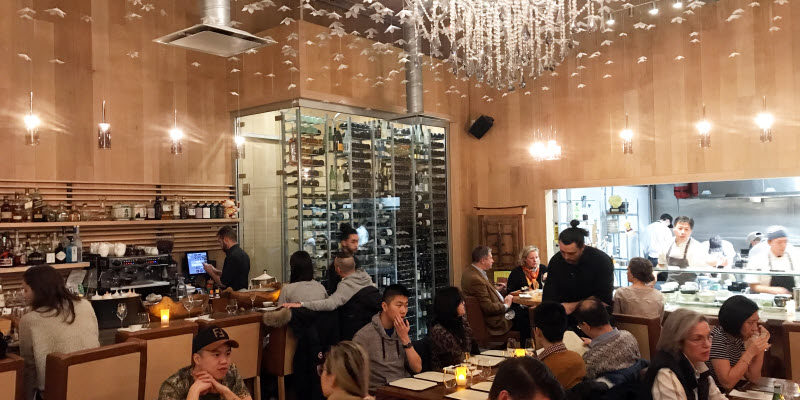 The space underwent a complete overhaul a couple years back, seeing the nondescript look make way for a zen vibe thanks to oak-paneled walls and dangling ceiling flowers; without forgetting the addition of a wine fridge and – finally – a washroom.

The dining room flooded with 70s funk music was packed to the gills on this cold Wednesday night, with every chair, banquette and bar stool filling up as soon as vacated by the previous occupant.

The offering at Park's restaurant reflects his background and training as a Korean who attended culinary school in Tokyo.  Japanese and Korean specialties fill the one-page menu, but the star of the show here is the sashimi and nigiri made with the freshest fish out there and served in eye-catching arrangements and platters.

Antonio places the utmost importance on sourcing by importing his fish directly from Japan and other regions from hand-picked, sustainable suppliers.  His red snapper even arrives acupunctured and practically alive; it doesn't get fresher than this!

This naturally comes at a premium, but the price is well worth it in my opinion.  Orders of 8 to 12 makis or nigiris can go for $45, but nowhere else is the raw fish this naturally sweet and firm fleshed.

The best way to fully appreciate PARK is via Antonio's multi-course omakase – chef's choice – tasting menu.  However, in the company of my children, we had to opt for "safer", ŕ la carte items – which work better for the wallet.  Also, I cannot pass on the kimchi Caesar when here.

A bowl of salted, buttery edamades was followed by a velvety sweet potato potage and a bright, crunchy Asian salad.  For mains, we opted for a savory bowl of japchae (stir-fried glass noodles), a stellar tuna/salmon tartare maki roll and more salmon makis for the little ones – thrown on the house, because kids eating sushi are cute! 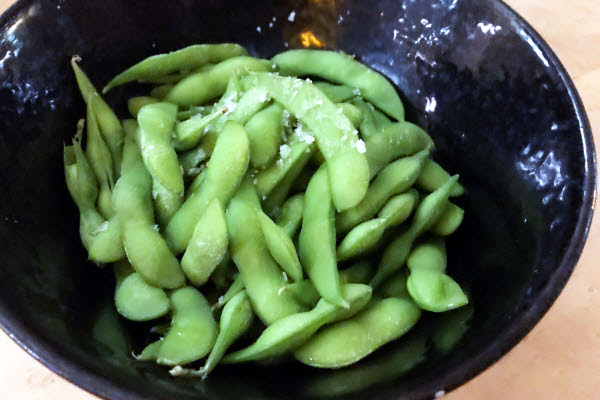 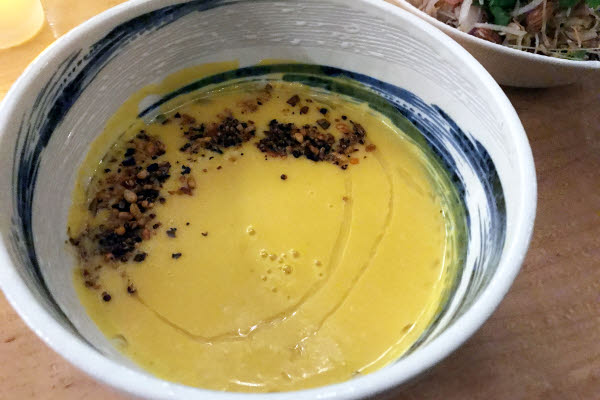 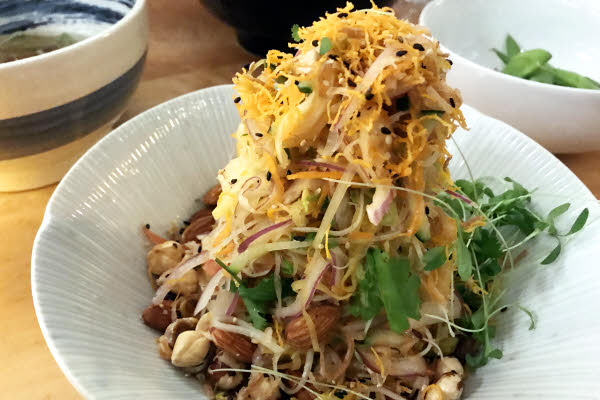 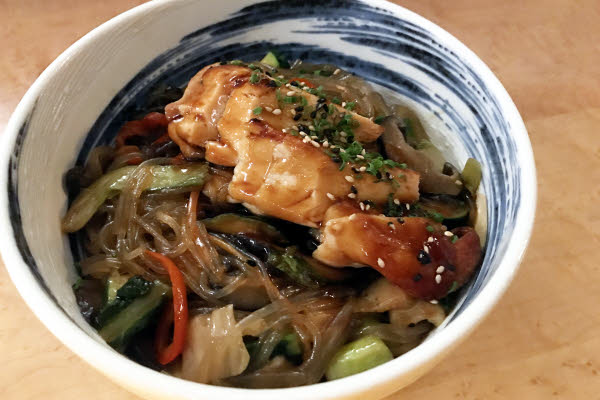 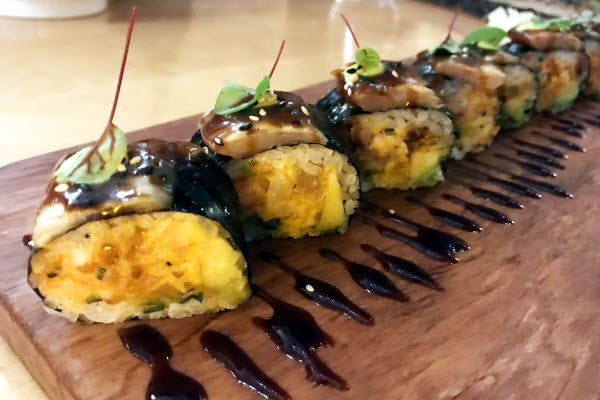 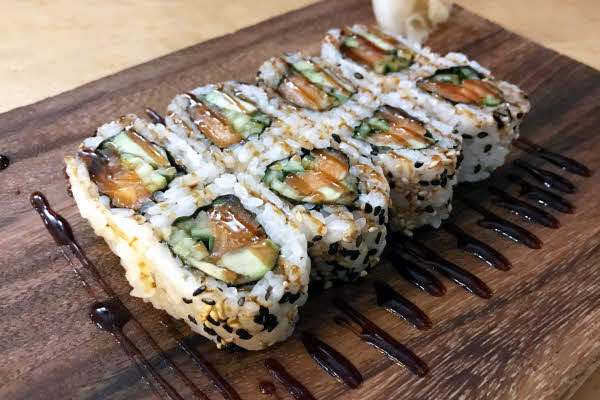 tagged:  WORTH EVERY PENNY

One of PARK's only weaknesses in the years that followed its opening was the high turnover in waitstaff.  While not necessarily a bad sign, it felt like I was served by a different person on every single one of my frequent visits.  I am happy to say that recently this trend seems to have reversed, as I have witnessed more continuity in the last two years.

One of the joys of eating at Antonio's restaurant is to witness the sushi master in person; sampling his creations while watching him work his magic from a stool at the sushi bar is an experience worthy of any foodie's bucket list.

While the majority of star chefs are rarely on site at their establishments or at most solely doing final plating, Antonio is not only always present; he is there slicing, rolling and arranging most of the sushi churned from his kitchen.

One of the hardest working restaurateurs in town, his sprawling empire has steadily grown to count a dozen or so spots in Montreal – Lavanderia, Jatoba and Kampai Garden, to name a few – plus one in Toronto.  That being said, his landmark Westmount joint is where it all started.

And while his style of sushi – topped nigiris, large multi-layered maki rolls, dazzling displays – is more commonplace today, Antonio was a pioneer in this trend.  I also credit him for having changed sushi forever for me; as I find myself comparing every other place to PARK, although nothing manages to top it.

While others were battling each other in lineups for Boxing Day sales, I spent my evening with the most important people in my life at one of my favourite places in town.